A family’s proud history is at the heart of the new Clydeside Distillery in Glasgow.

Tim Morrison, the chairman of the distillery, set up Morrison Glasgow Distillers (formerly Stanmorr) in 2012 with a vision to revive distilling in Glasgow, writes Kenny Smith.

The firm bought the old Pumphouse in 2011, which was built on the historic Glasgow Queen’s Dock overlooking the Clyde. John Morrison of Morrison and Mason built the building and was the great-great grandfather of Tim.

The Clydeside Distillery started distilling on  6 November this year and on 23 November the distillery opened its doors to visitors. A special opening evening was held on Tuesday this week.

Clydeside offers visitors a chance to walk through 140 years of history of the Clyde and its rich tapestry of shipbuilding and commerce. There are interactive whisky tours, a chance to purchase whisky in the shop and a cafe all on site.

Tim said: ‘Glasgow has an affinity with Scotch whisky unlike any other city in the world with the Queen’s Dock previously witnessing the exports of whisky with ships sailing past the Pumphouse destined for all continents of the world.

‘The city was once home to countless distilleries, blending houses and bonded warehouses, bottling plants, cooperages, maltsters and other associated businesses. One of the first malt distilleries to be build in Glasgow for over a century, Clydeside Distillery will celebrate the significant role that whisky has played in shaping both our city and Scotland as a whole, while putting Glasgow right back on the Scotch whisky map.’ 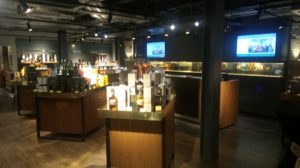 The shop is packed full of whisky

The distillery tour begins with an entertaining short film, explaining Glasgow’s history with whisky, before visitors look around interesting displays telling the story in depth.

The tour then takes visitors into the distillery itself, cleverly decorated in red and black colours, to match the hulls of the ship which were previously built in Glasgow.

Its two copper stills, each weighing about two tonnes, were crafted by Scottish coppersmiths Forsyths of Moray.

The first whisky will be ready in five years, with Tim promising that no gin will be created at the Clydeside Distillery. 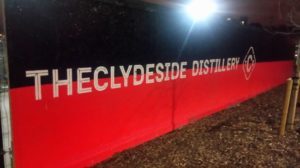 The Clydeside Distillery cleverly uses the black and red colour scheme of ships, as part of its branding