Scottish Field drinks blogger Peter Ranscombe turns his hand to cocktail making – and you can too next Wednesday on Clos19’s Instagram Live. Dinner jacket optional.

THERE’S something almost perverse about asking a teuchter to mix a whisky cocktail.

Ask any warm-blooded Highlander how they take their whisky and we’re likely to reply, “Neat… with just a wee drop of water”.

But I’m always up for a challenge – especially if it gives me an excuse to don a tuxedo and prance around the flat muttering, “Bond, Brooke Bond Scottish blend”.

Plus, it’s also healthy to challenge my preconceptions about how to serve spirits, as I discovered last summer with Eight Lands at Glenrinnes distillery.

Given my lack of hand-eye coordination, mixing cocktails isn’t something that comes naturally, but I’m told we all need to learn new skills during lockdown and so I spent this afternoon learning how to concoct creations online from Glaswegian drinks guru and Belvedere vodka brand ambassador Mark Tracey and Jake O’Brien Murphy, the Scouse bartender at the American bar in The Savoy hotel in London.

Well, it was “World Cocktail Day”, after all.

This afternoon’s session was a dry-run for next Wednesday at 5pm BST, when Tracey and Murphy will take to Instagram Live to deliver the first “virtual spirits summer cocktail masterclass” hosted by Clos19, the online retail arm of Moët Hennessy, the French owner of Scotch whiskies Ardbeg and Glenmorangie, along with Belvedere vodka and its eponymous Cognac brand.

Armed with a cocktail shaker, some store cupboard ingredients and some whisky-fueled enthusiasm, I set to work, with the two experts shouting the occasional instruction from across the kitchen via Zoom.

I didn’t think I’d enjoy the Belvedere almond milk punch – the new “signature serve”, also known as the “Belvedere air” in more sophisticated overseas markets – because I sometimes find almond milk too malty on its own, but Tracey and Murphy balanced it nicely with fresh lemon juice.

As an aside, I’m reliably informed that a “signature serve” is what we used to call a “serving suggestion”, back in the days before body warmers became “gilets”.

Next up was the Hennessy and ginger, which – as the name suggests – was perhaps as simple as a cocktail could get, consisting of Cognac topped up with ginger ale.

Murphy explained that such simple long drinks were coming back into fashion before the lockdown.

Then, out came the bigger guns, starting with the Glenmorangie ginger and honey highball, a great combination that picked out some of the sweeter flavours of the Highland single malt.

Last, but by no means least was the Ardbeg dirty daiquiri – Scotland’s peatiest whisky is a big favourite with bartenders (or “mixologists” as I’m told I now need to call them) because its smoky notes can stand-up to other strong flavours.

I’ll always have a soft spot for Ardbeg; staying in its Seaview Cottage next to the distillery for The Scotsman Magazine remains one of the highlights of 15 years of travel writing.

Apple juice and fresh lime were ideal ingredients to cut through the rich whisky and again provided balance.

“Don’t think of the ingredients as being set in stone,” Murphy advised. “Think of them as the DNA of the drinks to help you start experimenting”.

While shelling out for four bottles of spirit during lockdown to take part in next week’s masterclass may lead to a sucking of teeth from tight-fisted Scots like myself, Tracey and Murphy are full of ideas for how the ingredients can be mixed and matched in different combinations.

Both of them were immensely patient with the journalists today – even when ice wasn’t to hand – and I reckon they’ll be really entertaining next week on Instagram Live too.

Now, if you’ll excuse me, I’m off to get dirty with some more Ardbeg… 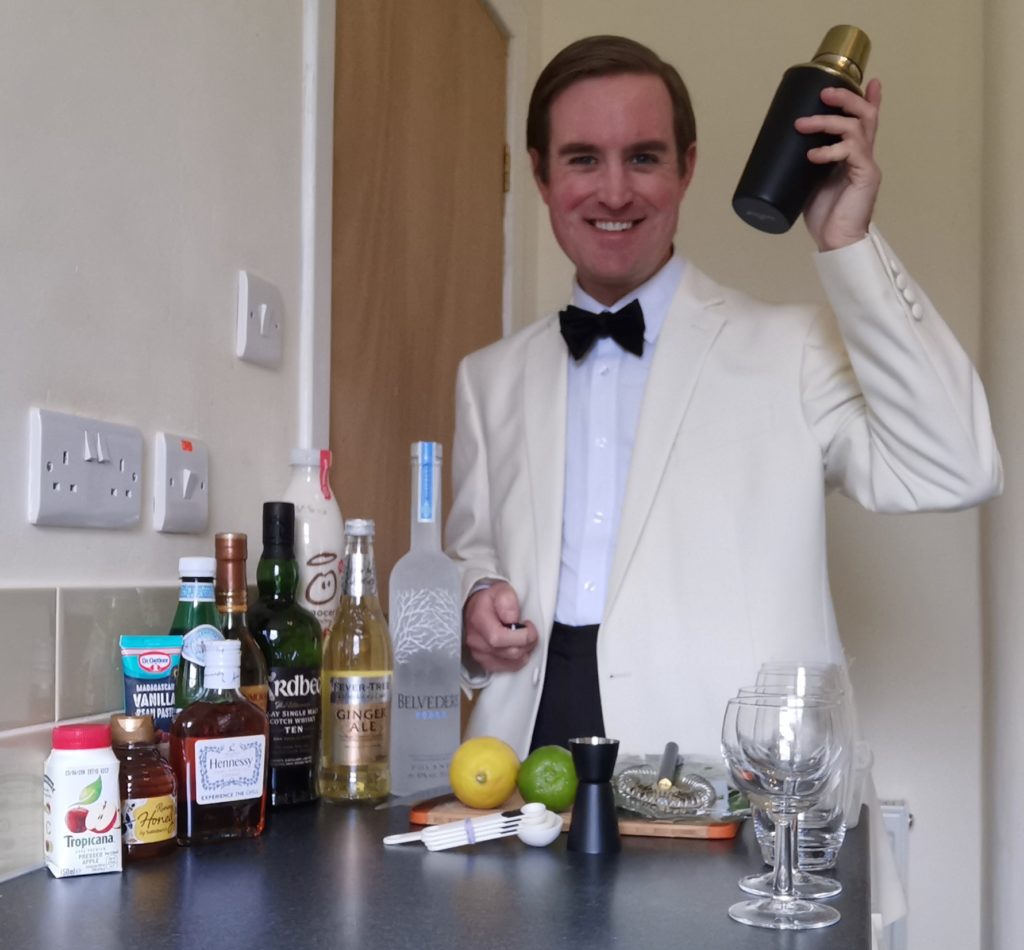 Read more of Peter Ranscombe’s blog entries about wine, whisky and other drinks on The Grape & The Grain at https://www.scottishfield.co.uk/grapegrain/

The post Four covid cocktail recipes so easy even Peter can make them appeared first on Scottish Field.