Having quit a job in finance to follow his passion for working in the drinks industry, Andrew Clark-Hutchison has opened the Dark Art Distillery.

Andrew has established the craft gin distillery and visitor centre in the picturesque town in Dumfries and Galloway, where his family have lived for generations. The distillery’s gin still is named ‘Peggy’, after Clark-Hutchison’s grandmother who hailed from Kirkcudbright.

The Dark Art Distillery and visitor centre, which takes its name from the exceptional dark night skies of the nearby Galloway Forest Park and Kirkcudbright’s reputation as the Artists’ Town, has been built in two former classrooms of the old Johnston School in Kirkcudbright, which closed in 2010.

The distillery forms part of the redevelopment of the 19th century school building which has been led by the Kirkcudbright Development Trust. The distillery’s neighbours include the Dark Space Planetarium and the Wee Pottery Studio.

The initial idea and plans for the Dark Art Distillery were born in 2017, inspired by Clark-Hutchison’s work with many companies in the drink and hospitality sectors during his career in banking.

His dream of setting up a gin distillery took a major step towards reality after Andrew won the inaugural Guy & Co-Creation Award in 2018. Guy & Co is a creative and research agency that gives brands the confidence to challenge for bravely effective results.

They ran a national competition to pick an entrepreneur they could support through their unique blend of insight development, brand creation and consumer testing that helps de-risk brand launches and re-launches. The prize bundle also included packaging by Guy & Co, PR support from Beeline PR and financial advice from French Duncan.

With additional funding from the Dumfries & Galloway LEADER programme, building work began during the latter part of 2019 and early 2020 before being halted by the Covid-19 pandemic.

The Dark Art Distillery’s first creation is Sky Garden Gin (£36), a premium craft gin which is inspired by the crystal clear skies of the nearby Galloway Forest Park which are particularly stunning in the evening.

A classic dry gin, it contains 18 different botanicals, including lavender and calamint, along with some which only blossom at night time and are grown in a local nursery one mile from the distillery. Sky Garden Gin will be available to buy at the distillery or from its website, while it will also be available in selected bars. 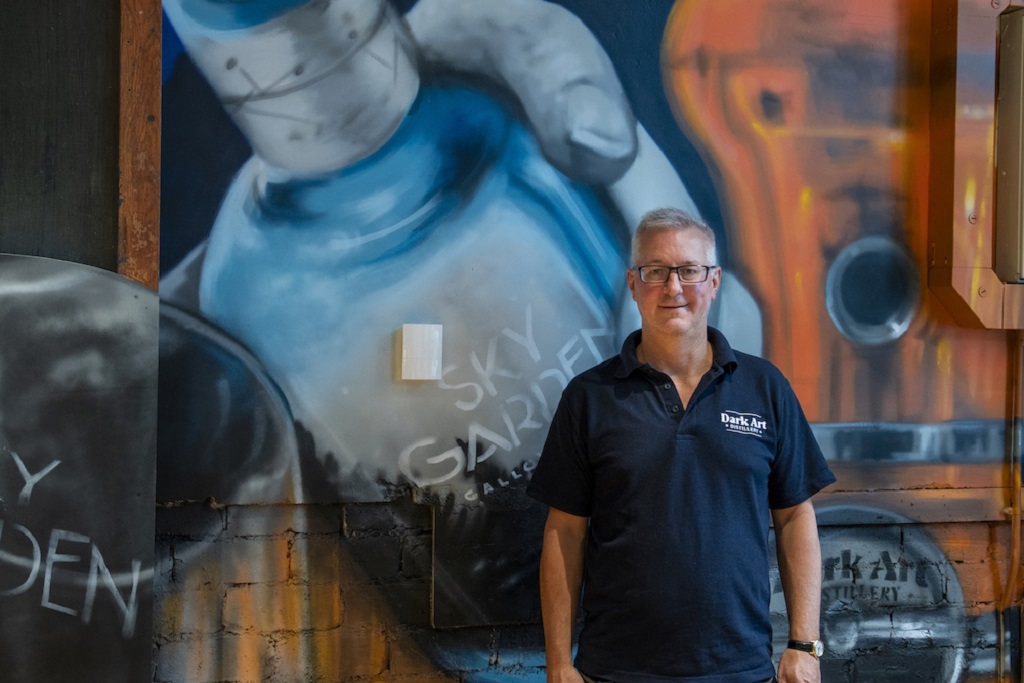 The distillery’s gin production is steered by distiller Fiona Williamson, formerly of Raasay Distillery and a graduate of the renowned MSc in Brewing & Distilling at Heriot Watt University, using a 450L still named ‘Peggy’, which is named after Andrew’s grandmother.

Andrew said: ‘It’s incredibly exciting to open the distillery and see my dream come true. My family has a very close connection with Kirkcudbright and the surrounding area so it’s wonderful to return home as it were. I believe we can attract many new visitors to Kirkcudbright and the wider Dumfries and Galloway region, which remains something of a hidden gem that many people have yet to discover.

‘I’d like to thank everyone who has been involved in getting The Dark Art Distillery to this point. Winning the Guy & Co-Creation Award was hugely helpful in giving the project momentum. The subsequent funding from Dumfries & Galloway LEADER programme was vital and we’ve had excellent support throughout from the Kirkcudbright Development Trust. My thanks also go out to Francey Joiners & Shopfitters for their work on the Visitor Centre, Mabbett & Associates Ltd. and Fabweld Ltd for work on the production centre of the distillery, and Carl Gmbh for creating our stunning gin still.’

The distillery has recruited two members of staff to host tours and gin tastings. It is hoped that as interest in the distillery and visitor centre grows, up to five new jobs will be created within a year of opening.